I've started to use a lot of Go recently. I just love the language! Seriously, I don't think I have felt this much love for any other language!

I'm ashamed to admit that it was up until yesterday that I didn't quite understand the behavior and implementations of Slices in Go. There are already so many great blog posts out there that I don't think I have anything to add. However, that shouldn't stop me from writing another blog post on the subject because with that mindset my blog wouldn't even exist. So in addition to the hundred articles out there on Go Slices, here's the 101th. 😁

Slices are flexible and they should be preferred over arrays whenever possible. The most important thing to note is that slices have Arrays underneath them. I like to think of slices as the frontend for arrays.

ZerothElement in sliceHeader points to the first* element of the array underneath. It doesn't necessarily have to point to the first\ element itself as we will see later. 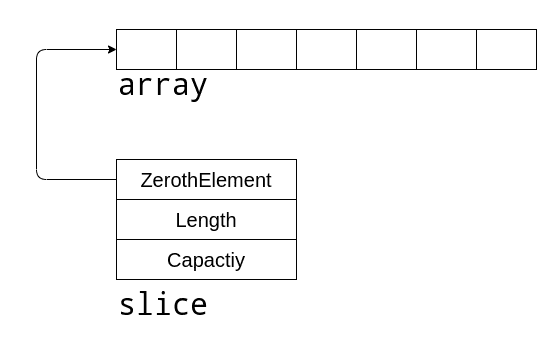 One thing that just seemed a little off to me in the beginning was the need for capacity in slices. How is it any different from the length of the slice itself ? None of the languages that I was familiar with had this concept of length and capacity. Almost always, the length was sufficient to define the size of an array or a list or whatever you want to call it.

The capacity of a slice can be set when creating the slice with the make function. If no capacity is supplied then it defaults to the length of the slice.

To put it simply, the capacity of a slice is the size of its underlying array*. It's a little complicated than that. We'll cover it in a minute.

Let's start by making a new slice with a predefined capacity.

This code will internally create an array of integers of size 5. However, the slice will have access to only the first two elements of the array since its length is 2. If we try to access the third element then we get a runtime error.

Now consider that we need to add a third element to mySlice.

Take a moment to think and tell me this - did the append function create a new array?

What actually happened here is we created a new slice with an incremented length of 3 and the new element 10 was inserted into the array. But this new slice still points to the same array. We have a situation where both mySlice and myNewSlice are pointing to the same array. I think that's pretty cool.

Multiple slices can point to the same array

Now, of course, this was only possible because the array underneath actually had room for growth. If initially, we had set the capacity of mySlice to 2 then the append function would have no choice other than to create a new array. As an exercise, you can try appending more than 10 items to the slice and observer the behavior.

You'll see that the first elements of the two slices still point to the same address.

A closer look at the Slice Capacity

Earlier when I said "The capacity of a slice is the size of its underlying array", I lied. It can be the case but it's not quite accurate. Let's take a look at the example below 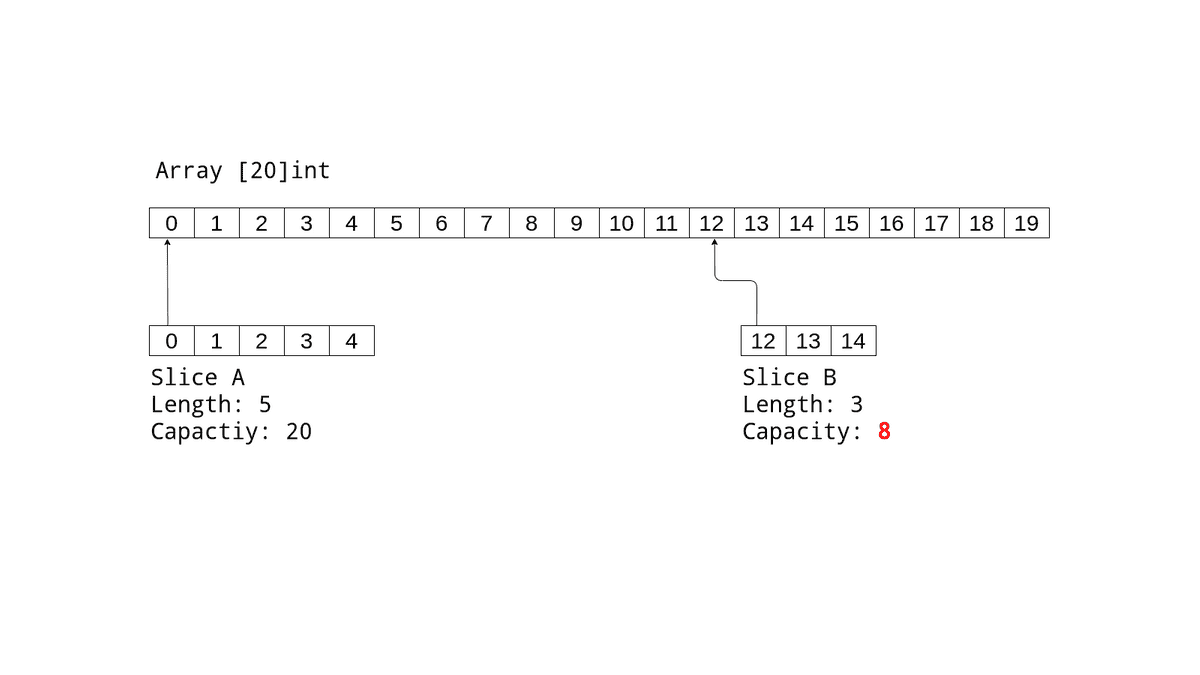 We have that two slices sliceA and sliceB and both of them have a pointer to the same array but they represent different "pieces" of the array. sliceA represents the first 5 elements of the array while sliceB represents the 3 elements starting from the 12th index.

The Capacity of a slice is equal to the length of the underlying array, minus the index in the array of the first element of the slice (zero in this case).

We start by creating a parentSlice and then slicing it to create two new slices sliceA and sliceB. If you run the program above you can verify by checking the addresses that all the 3 slices are in fact pointing to the same array.

This address should match the address of sliceB's first element.